To stretch myself both creatively and technically this year, I am doing a 52 week photography challenge in a group on Facebook. Each week, there is a new assignment with themes like composition, storytelling, and inspiration. This week's challenge was Composition: Leading Lines.

Normally I like to shoot outdoors, but weeks of rain have left us with a soggy mess. Instead, I decided to look inside my house for inspiration. Below are two of the photos I shot for this week's challenge. The photo on the left is the one I submitted to the group, as the composition better met the challenge criteria. I also posted this photo on my personal Facebook page along with the one on the right. I gave no explanation in either case as to where the pictures came from. Needless to say, I got quite a few questions (from both the group and my friends) as to what the heck they were.

So what are they?

The object in the first photo came from my china cabinet. It is the inside of a leaded crystal vase. To get the shot, I placed the vase on top of my sofa facing out toward our backyard - this helped to reflect some color and light back into the clear glass. Also, that sucker is really heavy - way too hard to hold while taking the shot! I did some addition filtering on the resulting image to bump up the color and the contrast to better define the "leading lines". 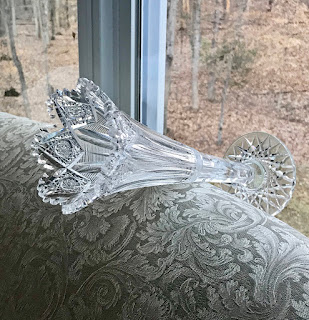 The object in the second photo came from my fireplace mantle. It is the inside of a mercury glass pumpkin. To get the shot, I tilted the pumpkin on its side in front of a mica shade floor lamp, so that the brightest part of the light aligned center with the stem on top and the opening on the bottom. Other than a slight cropping adjustment, there was no additional filtering done for this shot. Although the ribbed sections of the pumpkin were not as prominent as I had hoped, I still like the overall effect. 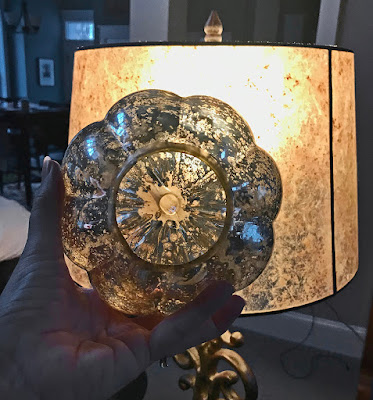 Think you need a high end camera and a macro lens to get shots like these?

Wrong! Since my camera bag was in the bedroom, along with my sleeping husband, I decided not to disturb him and instead used my iPhone 7 to take some test shots. When the test pictures came out so well, I decided to use them for the finals.

When taking photos like these, don't be afraid to experiment. I tried to shoot the vertical staves on the back of my dining room chairs, the inside of the extender wand from my vacuum cleaner, and the spindles on the head of the brass bed in our guest room. Unfortunately, those did not turn out as well as the shots above.

Have an unusual macro shot you'd like to share? Feel free to add them in the comments below!

Email ThisBlogThis!Share to TwitterShare to FacebookShare to Pinterest
Labels: photography

Located in the Village of the Arts in Bradenton, Florida, TRZY Studios is owned by 3 sisters: Chris Webb, Lynn Walker, and Karen Ruby. We feature original art, handmade jewelry, and vintage resale items.

Visit us in the Village of the Arts